I’ve been spending a lot of time getting back into the intersection of health and technology (after a long time away). Because I currently have HealthTech clients, and because I wanted to learn more about the specific challenges facing health tech companies with service delivery, I attended the September 2019 version of Health 2.0 in Santa Clara.

The first observation about the differences between a health tech conference and conferences I’m generally acquainted with speaking at or attending is, it’s just tech! That may sound like a silly observation, but so many people over the past year have told me how health tech is 15 years behind regular tech. The crowd at Health 2.0 was definitely not representative of the larger industry. But it was interesting to compare and contrast my usual experience with this one.

Even at this conference, with the cutting edge attendees, there were still some things that genuinely struck me as conversations we’ve had in the DevOps community for a number of years. Let me explain.

I haven’t had much time to dig deep into the HiTrust CSF, but I was able to have a great discussion with Ryan Rich and Katie Peterson from Datica about their HiTrust solutions.

Ryan was explaining that there are sometimes very prescriptive requirements for the certification. As a verteran of many certification processes (GDPR, PCI, SOX, ISO, etc) it was interesting to hear about the approach taken by HiTrust. In some respects, I wondered if there were opportunities to fulfill the requirements if we understood the spirit behind the controls.

In other respects, I was concerned that HiTrust might look too much like ITIL. ITIL was definitely best practice for the time, but I have major concerns about a government agency being able to keep up with the pace of change in technology today in specifying standards. After watching the communications standards in healthcare hamstrung for so many years by an abundance of overly strict agreements, before the advent of FHIR, I’m concerned that the utility of HiTRUST may be so only for a limited time. After such time (or maybe already), I have a concern that it may be a weight dragging down the pace of innovation in health tech.

I also heard the concerns of those who felt that those with a tech background (Google, Apple, Amazon, etc) may not understand the real concerns facing those in health tech. That the consequences of failure in health tech are so much greater than those in the technology companies, that it’s a very different problem. Maybe dragging down the pace of innovation in health tech is not so bad. We certainly don’t want to “move fast and break things” when dealing with heart valves!

I think that really misses a lot of the accomplishments we’ve made with the DevOps movement in the past decade or so. I used to be told at Salesforce that it doesn’t matter if Netflix goes down, that Salesforce was a different beast. My response was always, if that’s the case, why are they so much better at running production systems than you are?

It ignores Gary Gruver’s experience automating of the testing of the JetDirect cards at HP. This was not software being shipped to a website like Google Docs, these were pieces of hardware that were to be installed on customer premises.

There are countless examples of things that we’ve learned about service delivery, quality, and safety over the last decade. The irony is a lot of the things that John Allspaw and Adaptive Capacity Labs are doing bringing “research-driven methods and approaches to drive effective incident analysis in software-reliant organizations”, come from medicine and can be applied to health tech “software-reliant organizations”!

One of the most direct displays of what we know from the DevOps movement was given by Michael Palantoni from Athena Health. He was talking about what was required to deliver Value Based Care. 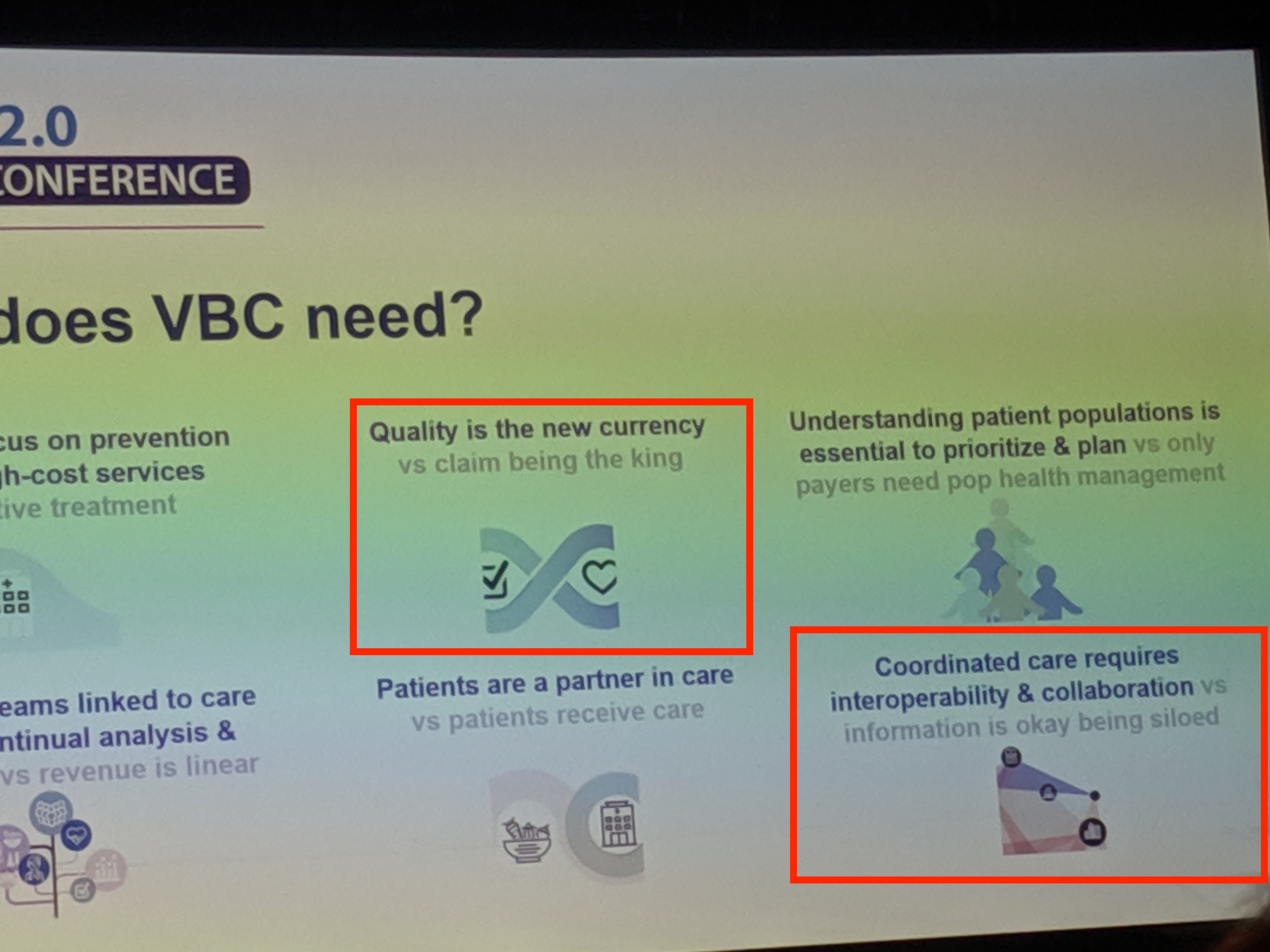 While there are many lessons on the slide we’ve learned in DevOps about communicating with, and deeply understanding customers, the two that really jumped out at me were those related to Quality and Collaboration. These are both topics I’ve spoken about at DevOps conferences and recognize as essential for the successful implementation of a socio-technical system, which is at the core of health tech!

Dr. David Levin talked about how health tech is learning how to handle thousands of health tech IOT devices where communication needs to be a 1st order citizen. He expressed how health tech was learning how to deploy, collect, analyze, and respond to this type and volume of data. When running Site Reliability Engineering for the SolarWinds Cloud, our products routinely ingested and processed hundreds of thousands or millions of data points per second depending on the product. One product was able to do this while taking 37 seconds of planned partial downtime in a year. Losing a single customer datapoint was taken very seriously. We don’t need to reinvent the wheel, we need to stand on the shoulders of those who have come before.

Dr. Levin’s sentiments were echoed by Cris Ross, CIO of the Mayo Clinic. In announcing their partnership with Google Cloud, he told the audience, “We want to configure ourselves as a platform company”. The explosion of health care data, sensors, EMRs, etc. introduce a lot of complexity and we “need systems that help manage that complexity”.

Lastly, I was struck by the statement by Rachel Blank from Rory. She explained that there is often a misconception that her and other health tech products were looking to replace doctors. As Ms. Blank explained, nothing could be further from the truth.

This sounds so much like John Allspaw explaining the role of automation in technology. Automation is not to replace humans, it’s to augment the humans, to partner with them, to make them more successful. It would be foolish to hand over all autonomy to automation. This sentiment was echoed by machine learning/AI folks at the conference as well. Radiologists are not being replaced by an algorithm.

There are so many similarities between tech and health tech, that one major difference did jump out. Even in panels specifically focused on diversity topics, or the role of women, the moderators continually referred to the entire panel as “guys”. I understand that this was probably only jarring for me, but at this point, is something to which I’m not accustomed. After hearing Bridget Kromhout passionately explain to the DevOpsDays Ghent crowd in 2014 how this was exclusionary, I’ve taken it to heart.

I’m sure the health tech community is not far behind on this one either.

One major difference that I discovered between a traditional tech conference and the Health 2.0 one was the emphasis on solving real problems in the world. I’m sure there are many folks in tech who believe that their cat food delivery service is solving a real world problem. Other than perhaps the closing panel on ethics at SRECon APAC this year, I’ve never seen a tech conference address such real societal concerns head on.

These were active discussions about pragmatic solutions to many problems. Just like with the Automation discussion about, these were not “tech solves everything” solutions. They were using the power of technology in transformational ways.

The first day had a panel called The Unacceptables. There were examples of solutions people were working on dealing with homelessness, maternal mortality, and human trafficking. These are real problems affecting society about which we should all be directly concerned.

The second day had a panel called Social Movements in Healthcare Amplified by Technology. This panel dealt with issues of data privacy, data transparency, diversity in funding, and sexual harassment.

These panels were extremely impressive, not just for the topics they were discussing, but in their belief in using technology for good (as opposed to persecution and death).

I really learned a lot attending the Health 2.0 conference. I am grateful to the organizers for putting together such a great conference. Not only did I have a lot to think about during the two days of attendance, but there are many people I hope to follow up with for more discussion. There are challenges that I will be considering some time to come.

But, I would also like to participate. I would like to be part of the conversation. I’m considering trying to speak at the next HIMSS 2.0 Conference in Orlando, FL next year. What would I talk about? Operational Concerns for Health Tech Startups? How to scale your health tech product with reliability and security? I’m interested in your thoughts.